Talk about your love affairs.

The first inkling was a tiny crystal radio that let the Golden Age of Cleveland radio and the kings of R&B fit neatly under my pillow and rock me to sleep. Later, my grandfather gave me a vintage Zenith table model with real wood veneer trim and a short wave band. Suddenly, those “woo-eee-ooo” radio-tuning sound effects I’d heard at the movies were real, and so was the BBC and some guy in Zambowanga named Earle.

At the intersection of radio and dairy products, I worked at Baskin-Robbins in high school: up to my elbows in ice cream with whatever Top 10 was playing on the radio behind the counter.

A great-grandfather-in-law, it turns out, was one of America’s first radio manufacturers. We have a bunch of his sets, with giant horn speakers and enough dry cells to power a submarine.

I love radio because, when it’s good, that movie-behind-your-eyeballs demands that each customer’s imagination becomes part of the creative process… and instantly involved with your brand. 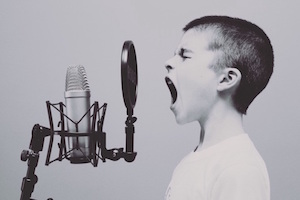